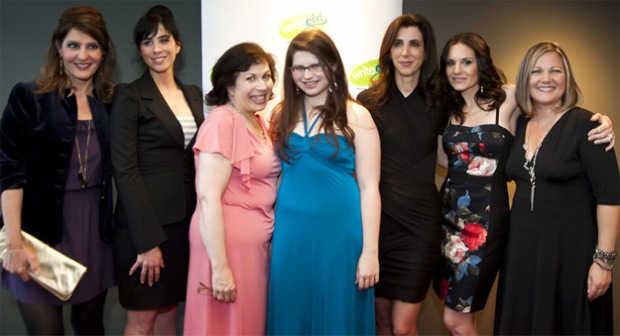 About the 2011 Bold Ink Award honorees:

KARA DIOGUARDI
While you may know her from her role as a judge on American Idol, Kara DioGuardi is one of the industry’s most sought-after songwriters and producers.  Her songs have appeared on more than 159 million albums.  A Grammy-nominated hitmaker, Kara also works at Warner Bros. Records as Executive VP of Talent Development, Office of the Chairman.  Kara co-owns Arthouse Entertainment, a publishing company whose hits this year include songs such as Bruno Mars’ “Grenade,” Carrie Underwood’s “Undo It,” and Cee-Lo Green’s “Forget You.” She is currently a judge on Platinum Hit, Bravo’s new reality show in search of America’s best songwriters.  This April, Harper Collins released her book, A Helluva High Note: Surviving Life, Love and American Idol. More than 307 of her songs have been released on major labels and nearly 150 of those have appeared on platinum-selling albums. Kara’s songs have been recorded by Grammy-award-winning artists such as Pink, Carrie Underwood, Christina Aguilera, Gwen Stefani, Kelly Clarkson, Celine Dion, and others. Kara has also build recording studios at various locations of the nationally renowned youth outpatient substance abuse center, Phoenix House.  She has a scholarship fund in her family’s name, in conjunction with Columbus Citizens Foundation, which enables financially challenged Italian Americans to attend college.  Kara is a supporter of WriteGirl, and even made a surprise appearance on video at this year’s WriteGirl Songwriting Workshop, inspiring the girls with writing tips and activities.

SAVANNAH DOOLEY
Savannah Dooley grew up in Los Angeles, where she obsessively wrote screenplays, stories and poetry from an early age. At twenty-four she co-created, wrote, and produced the critically-acclaimed teen drama Huge with her mother, writer Winnie Holzman. Her short film Snapshot has been featured in several film festivals including Outfest and Palm Springs International Shortfest. Savannah was honored by queer nonprofit POWER UP as one of 2010’s “Amazing Gay Women in Show Business.” She is currently working on her first novel.

WINNIE HOLZMAN
Winnie Holzman received a Tony nomination and a Drama Desk Award for writing the book of the Broadway hit play Wicked. She created the memorable television drama My So-Called Life, which starred Claire Danes. Holzman got her start writing for the acclaimed drama thirtysomething and later executive produced (again with Marshall Herskovitz and Edward Zwick) Once and Again. Other theatre work includes the musical Birds of Paradise (with composer David Evans) and a ten minute play called Post-its: Notes on a Marriage which she wrote with her husband, actor Paul Dooley. She wrote the feature film ’Til There Was You which starred Jennifer Aniston and Dylan McDermott. Also an actress, Ms. Holzman appeared in Jerry Maguire and as Larry’s wife’s therapist on Curb Your Enthusiasm. Most recently she teamed with her daughter, Savannah Dooley, to write and produce the new ABC Family series, Huge. She is a graduate of Princeton University, received an MFA from the NYU Musical Theatre Program, and serves on the board of the Writers Guild Foundation.

ALINE BROSH MCKENNA
Aline Brosh McKenna graduated from Harvard and soon afterward commenced her writing career as co-author of the book, A Coed’s Companion: Everything a Smart Woman Needs to Know about College. In a summer class at NYU, Aline wrote and sold her first screenplay. Success followed with the critically acclaimed film adaptation of the novel The Devil Wears Prada, which earned her screenplay nominations from the Writers Guild of America, BAFTA and Scripter, and a win from the Women’s Film Critics Circle. Her credits include the hit comedies 27 Dresses with Katherine Heigl and Morning Glory starring Harrison Ford and Diane Keaton. Two of her movies will be released this year: I Don’t Know How She Does It directed by Doug McGrath with Sarah Jessica Parker and We Bought A Zoo with Matt Damon, directed by Cameron Crowe. Aline is currently writing a new version of Cinderella for Disney and an ensemble romantic comedy for DreamWorks. She lives in Los Angeles with her husband and two children.

SARAH SILVERMAN
Sarah Silverman was dubbed “the most outrageously funny woman alive” by Rolling Stone. Her repertoire includes everything from stand-up, film and television to iconic online videos. In 2010 she became a best-selling author for The Bedwetter: Stories of Courage, Redemption, and Pee. Her 2008 musical collaboration with Matt Damon earned her a Primetime Emmy® for Outstanding Original Music and Lyrics category and in 2009 she was nominated for a Primetime Emmy as Outstanding Actress in a Comedy Series for The Sarah Silverman Program, now in its third season. Her film credits include School for Scoundrels, The School of Rock, There’s Something About Mary and Say It Isn’t So. She recently completed roles in Take This Waltz opposite Seth Rogen and Peep World opposite Michael C. Hall. Silverman co-starred on the Fox comedy Greg the Bunny, and has guest starred in a slew of acclaimed and notable television shows such as The Larry Sanders Show, Seinfeld, and Mr. Show with Bob and David. Her role on Monk earned her an Emmy nomination as Outstanding Guest Actress in a Comedy Series.

NIA VARDALOS
Nia Vardalos started out in musical theater in her hometown of Winnipeg, Canada, later attending Ryerson Theater School in Toronto. She worked in the box office of The Second City and when an actress fell ill fifteen minutes before curtain, Vardalos convinced producers to let her go on. She became a performer/writer for the troupe, later winning Chicago’s Jeff Award for Best Actress. Today, Vardalos is an established and versatile actress, writer, producer and director. Her work is trademarked by a sharp wit and an accessible persona. She wrote and starred in My Big Fat Greek Wedding, currently the most profitable film of all time and one which earned her multiple recognitions. Awards include Writers Guild, Screen Actors Guild, Broadcast Film Critic and Golden Globe nominations, an Independent Spirit Award win and an Academy Award® nomination for Best Original Screenplay. Vardolos wrote, starred in and produced Connie and Carla with David Duchovny and Toni Collette and starred in My Life in Ruins opposite Richard Dreyfuss. She reunited on-screen with her Greek co-star John Corbett in her self-directed screenplay I Hate Valentine’s Day. She has guest-starred on numerous television shows, including Cougar Town and Curb Your Enthusiasm. Nia Vardalos is also a WriteGirl supporter. Last June, she helped bring our  girls’ words to life, reading alongside them at our season-end celebration.